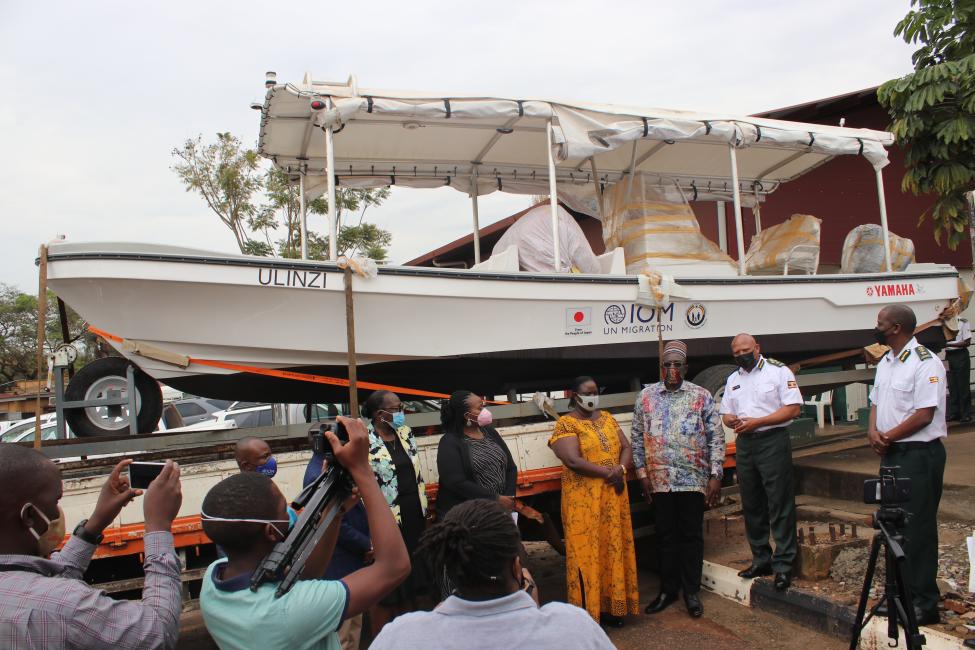 IOM Uganda has handed over a Patrol-and Rescue Boat and an assortment of Personal Protective Equipment (PPPEs) worth USD 115,000 to the Ministry of Internal Affairs.

The donation was part of the IOM Uganda project titled: “Strengthening Border Management to Mitigate Risk of Terrorism from Land and Maritime Borders in the context of COVID-19”, funded by the Government of Japan. It is aimed at supporting border management including on water bodies such as Lake Albert in the West.

It was handed over on 26 November by the IOM Uganda Chief of Mission, Mr Sanusi Tejan Savage, to the Acting Permanent Secretary of the Ministry, Maj Gen Apollo Kasiita-Gowa.

In his remarks, Maj Gen Kasiita-Gowa, who heads the Directorate of Citizenship and Immigration Control (DCIC), spoke of the wider benefits of IOM Uganda’s support on mitigating transnational terrorist threats: “When we get equipment like these, this is a contribution not only to national security in Uganda, but also to regional and international security, as well as a contribution to national and regional development.” He hoped that IOM would, in future, consider another boat to be deployed on Lake Victoria.

For his part, Chief of Mission Sanusi Tejan Savage said: “We are sure that with this equipment, the well-trained officers of DCIC will be better-placed to make Uganda borders more secure. Our prayer is that the equipment will be put to optimum use for the benefit of the people in this beautiful country.”

Since 23October, Uganda has suffered at least four separate bomb blasts in and around the capital Kampala, which have left the country on the edge.

In the context of the response to the COVID-19 pandemic, IOM also handed over automatic sanitizer dispensers, Sanitizer bottles, infra-red thermometers and batteries, handwashing stations, disinfectants and soap, various types of gloves and masks, gumboots, and disposable aprons, among other supplies.

Mr Savage added: “Even as we urge every eligible person in Uganda to get vaccinated, we still need equipment and supplies for personal protection. So, this boat comes loaded with an assortment of PPEs (Personal Protective Equipment).”