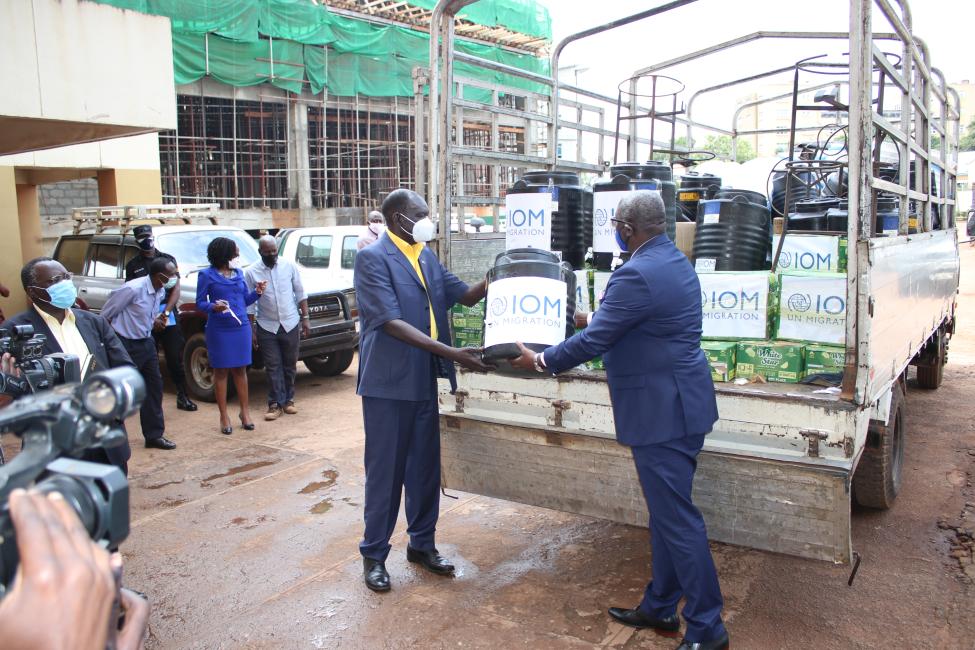 The International Organization for Migration (IOM) in Uganda has handed over relief items to the Office of the Prime Minister, meant to support victims of the recent flooding in the western district of Kasese.
The items were on 10 August presented to the Minister of Relief, Disaster Preparedness and Refugees, Hillary Onek, at the office of the Prime Minister in Kampala. They included hand washing stations, buckets, laundry Soap, sanitizer, and reusable face masks, valued at nearly UGX 22.4 million.

Speaking at the handover ceremony, IOM Uganda chief Sanusi Tejan Savage said Internal displacement such as that caused by natural disasters is one of the issues on which IOM is mandated to support the Government and people of Uganda. “Experience shows that when people are displaced, hygiene and sanitation are critical life-saving interventions,” Mr Savage said, adding that IOM was also working with Uganda Red Cross to provide further support on displacement.

The event was also attended by Mr Gerald Menhya, the Acting Commissioner for Refugees, and Brig Gen Stephen Oluka, head of the National Emergency Coordination and Operations Centre (NECOC).  Mr Menhya said the water levels in Uganda’s water bodies had been swelling since last year, and the recent flooding in western Uganda had displaced at least 2,000 people.

Minister Hilary Onek welcomed the support from IOM, and hoped more support from other organizations would follow. He said the current COVID-19 pandemic had affected the government’s capacity to cater for victims of disasters like floods.

“What happened in Kasese has been the most serious in the country so far,” Onek said, adding that that hundreds of people had been displaced and were now in camps. He said the IOM support was crucial as it would complement Government efforts to improve sanitation for the displaced. The minister cited other districts that have been affected, such as Ntoroko, where three sub-counties are submerged, as well as Buliisa, Amolatar. “With heavy rains coming back, we expect landslides. There are already some landslides but it is not yet catastrophic.”

Meanwhile, Minister Onek said, in the Karamoja region in the northeast has suffered irregular rains, which has led to crop failure. The Government now fears the region could face famine. According to IOM Uganda’s acting programme coordinator, Ms Odette Bolly, the agency is embarking on a project to support OPM and several district local authorities on disaster risk detection reduction and response.