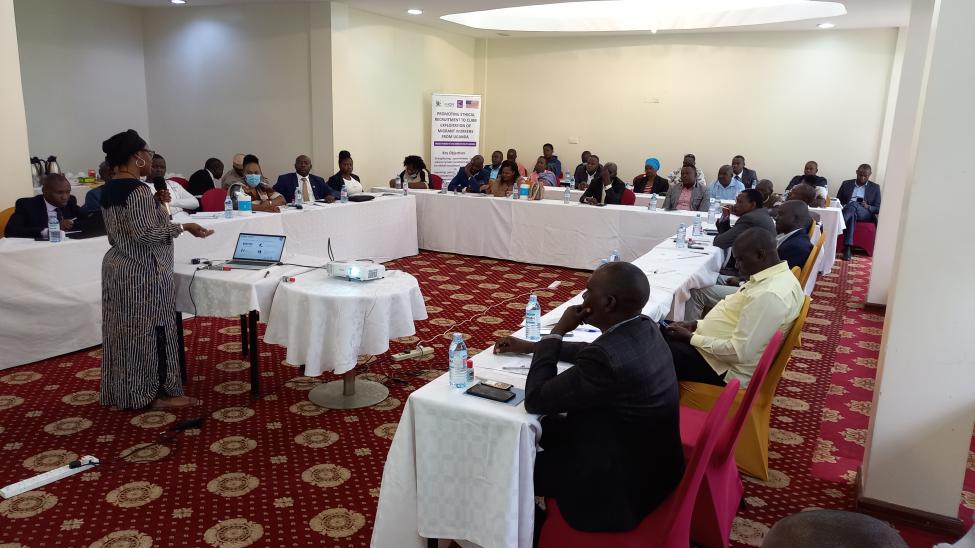 Conducted under IOM Uganda’s project to prevent exploitation of migrant workers, the training aimed to strengthen government commitment and adoption of ethical recruitment principles.  This project is funded by the USA Department of State Office to Monitor & Combat Trafficking in Persons (JTIP) through the Global Fund to End Modern Slavery (GFEMS).

IRIS is a global recruitment compliance tool, developed by IOM in collaboration with governments, civil society and private sector partners, to promote ethical international recruitment. The tool defines and establishes a benchmark for ethical recruitment (the IRIS Standard) and a voluntary certification program for recruiters.

The Montreal Recommendations on Recruitment guides policymakers on how to protect migrant workers during recruitment, migration, and employment. It was produced by IOM in 2020, after a 2019 global conference in Canada that brought together labour policy experts and practitioners from more than 30 countries.

Participants at the Mbale training included district Chairpersons and Labour Officers as well as Resident District Commissioners (RDCs) from eastern and northeastern districts with the highest incidence of Trafficking in Persons (TiP). The training sought to help them champion safe labour migration, considering the policy, regulatory and enforcement framework at national and local levels.

The IOM Uganda Programme Manager for Labour Mobility and Human Development (LHD), Mrs. Odette Bolly, led the training. She emphasized the need to establish a multi-stakeholder monitoring mechanism that protects job seekers both at work and in their localities, where recruitment begins.

“Statistics show that Uganda has over 800,000 youth entering the work-seeking phase of their life every year, but these jobs do not exist. It is therefore important the alternative of seeking jobs elsewhere is done in a way that respects their rights, is orderly, humane, and safe,” she told the leaders.

According to the Ministry of Gender, Labour and Social Development, more than 56,098 migrant workers left Uganda between 2016 to 2020.

Migrant workers are sometimes requested to pay recruitment fees and related costs, denied freedom of movement by their employers, deceived through recruitment processes which lack transparency; they may see their rights to privacy or confidentiality violated, and their attempts to raise grievances suppressed.

This, Mrs. Bolly said, is partly due to ignorance of workers’ rights and entitlements, including among some recruitment agencies, employees, and employers.

Kotido district Chairperson Paul Komol Lotee, one of the participants, agreed with Mrs. Bolly, calling for awareness-raising on how to report labour exploitation.

“There is need for this information to be cascaded from here to the grassroot; that is the only way we can create awareness among the population,” Lotee said.

In 2021, the Uganda Government, with support from IOM, developed a pre-departure orientation curriculum and manual and a handbook for migrant workers. The handbook has since been translated into five Ugandan languages.

In Mbale, participants identified practical ways the IRIS Standard can be implemented in the local context. Jimmy Ssegawa Ebil, the Kaberamaido RDC, said the IRIS principles can be well implemented if there is close coordination and consultation among the Ministry of Gender, Labour and Social Development, recruiters, and district leaders.

“I think they [recruiters] think and believe that ‘our work is to recruit and deploy’. In between, there is regulation as the work of government, and this is why I say, ‘please help us…’,” the RDC said.

Approximately USD 1.2 billion is remitted annually to Uganda by labour migrants, according to the Government. This could increase if employees are assured of safe and humane employment.

IOM hands over Equipment to Support Border Management in Uganda