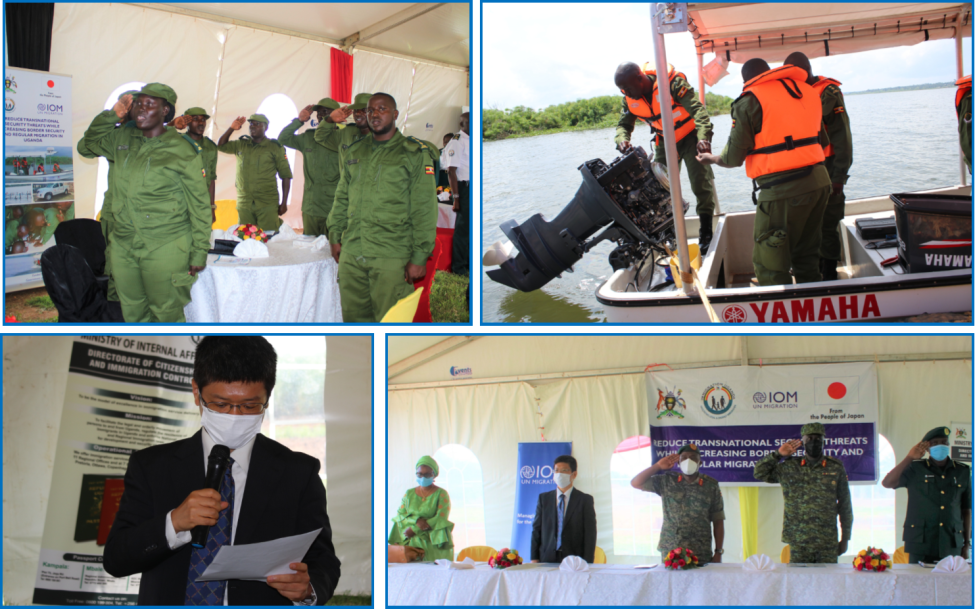 The Uganda Government has passed out 11 immigration officers under the nascent Maritime border security unit, after 10 weeks of intensive training on the shores of Lake Victoria. The eleven officers are all under the Directorate of Citizenship and Immigration Control in the Ministry of Internal Affairs.

The training was led by Uganda Army (UPDF) marine instructors, and supported by IOM Uganda with funding from both Uganda Government and the Government of Japan. It was part of a Japan-funded project titled: “Reduce Transnational Security Threats While Increasing Border Security and Regular Migration in Uganda”.

Speaking at the pass-out ceremony at Ntokolo Pier in Mayuge district on 21 May, the Deputy Ambassador of Japan to Uganda, Mr Mizumoto Horii, made reference to an event on 9 April, where IOM handed over a patrol-and rescue boat to DCIC.  He said:

“[At that ceremony] I made the emphasis that good border management will be realized only if we have both good equipment and well-trained officers. Now we have both of them, and be ready to conduct patrol on site. I really look forward to seeing the results of the training even after the end of the project period.”

The Commissioner for Immigration Control at DCIC, Mr Geoffrey Kambere, said this first cohort of maritime graduands was an answer to several maritime border security challenges.

“Out of what we see today, I am confident and convinced that the most valuable outcome of this training has been achieved... We have had our borders like Elegu flood, and this team will surely save lives,” Kambere said.  “They have ably demonstrated that they can enforce immigration laws, not only on land but also on water.”

The IOM Uganda Chief of Mission was represented by Ms Odette Bolly, who hailed the support of the Government of Japan and the strong partnership with DCIC. She said the present project would go a long way to reinforce operational capacity on Lake Albert with patrol vehicles and through capacity building of border officials, plus refining visa policy, work permit and citizenship guidelines.

To the graduands, this marked the birth of a vibrant maritime unit within DCIC that, they hope to lead and grow.

“This is an important addition of skillset to my CV,” said Joseph Wejuli, who was the class coordinator. “This training makes you a leader. We have to create and lead [maritime] unit at our work stations.”.

Loyce Amanio, the only female graduand, said: “Like they say, every situation is a serving opportunity. I am now looking at transferring some skills to my workmates so that we can all benefit, and serve this country better.”